A time to work, A time to play 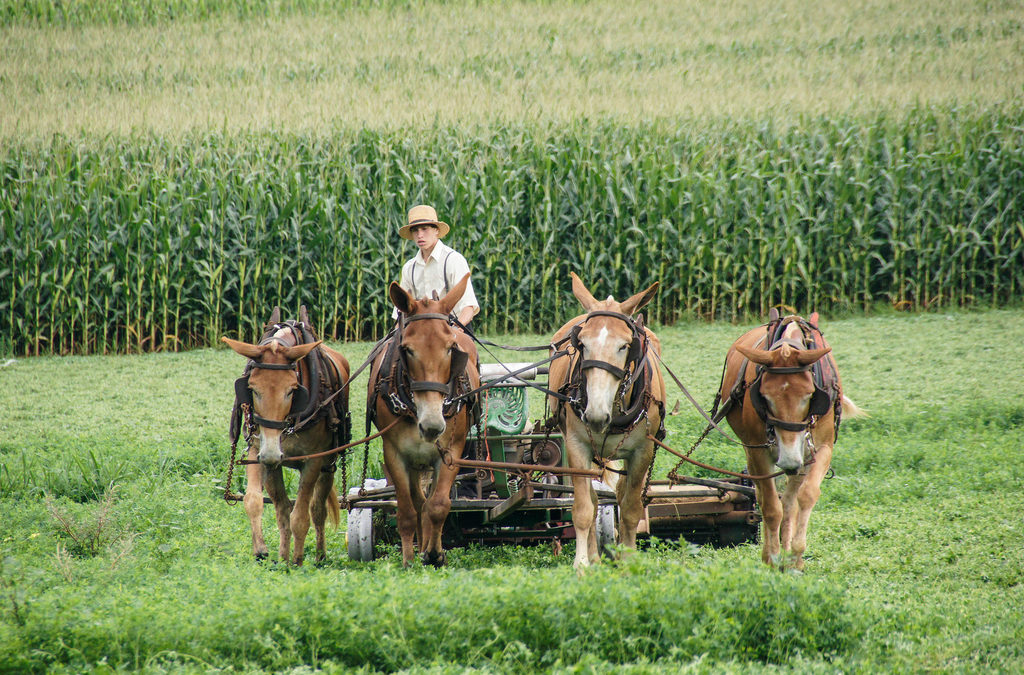 I distinctly remember one incident. We did some things the old-fashioned way. When the time came to fill silo, we still did it the old way. A corn binder went ahead and cut and bundled the corn stalks. We then had to follow behind with the wagon and load these bundles on the wagon by hand. It was a long and monotonous job. Often times we started in the morning when the dew was still wet. With it being autumn, it was often a bit cool in the morning. Now imagine with me, it is Labor Day. The corn was all bindered on Saturday and is waiting to be done. If you have ever handled corn stalks, you know that the leaves are extremely scratchy. The stalks are 7′-8′ tall. This morning, Dad had asked our uncles to come help us. That was definitely a morale booster. Us three brothers were looking forward to an afternoon of softball with our friends.

So in this setting the morning began. A heavy mist, almost a drizzle, began soon after we started. Of course us brothers knew that we need to get the job done before we join the ball game. So we started with earnest. Us 14-17 year old brothers with the older uncles and Dad. With the mist and a few hours work behind us, one of us wondered whether we should not quit on account of the “rain”. One wise uncle taught us something about life that we will never forget. It is a nugget to be treasured and passed on to all generations of silo filling youngsters. When the conditions seem to be against the job remember, “There are two things that don’t stop for rain! Silo filling and the NFL!”

This was not exactly what we wanted to hear but it proved a point. The work must be done and then play can begin. The day cleared and we had a wonderful afternoon of softball to relax our aching backs.

Dad got us a pony and cart to play with. Our first pony was an obstinate little black and white paint named Sailor. We were young and inexperienced so Sailor made full use of our lack of skill. He gave us many hours of fun and we learned how to handle horses. The next step was a young colt named Teddy.

When we got Teddy, he was just weaned from his mother. We played with him the first year and then we trained him ourselves. Teddy gave us more fun than Sailor did. I always had visions of steeple chasing, jumping over bars. I started off with simply laying a broom on the ground and leading him over it. When this was successful, I raised the bar a bit until he was jumping over it.

Let me assure you, I learned a lesson. The storybook versions are not always what happens in real life! I started Teddy up at a canter and as we approached the jump, we sped up to a loping gallop. My only miscalculation was the obstacles beside the jumping bar. This time the hurdle was too great for faithful Teddy. He veered a bit to the right and planted his feet in an emergency brake setting. I was ejected without a helmet or parachute. My flight was not far. It ended headlong against the trunk of the maple tree! I was stunned a bit and when I recovered, I had a splitting headache.

Once more, a country boy knows work comes before play. A neighbor dairy farmer was on vacation and we were asked to help with the chores. The next morning at 5 a.m. those cows had to be milked. We went to the barn to do chores. While my brothers and the neighbor man went out back to fetch the cows, I sat on an upturned bucket with my head in my hands. I was suffering extreme headache. Looking back, I probably had a slight concussion but the chores needed to be done. I braced up and the chores were done as usual.

We also had our group of neighborhood chums that played and camped together. We ranged in age from 11-15 years old. Every year we went to the farm pond and spent a night camping and in general proving that we were “men”. We planned our own menus and made our own meals. We managed to smuggle some fire crackers along. Oh for the simple pleasures of youth. Have you ever heard what a Moon-whistling Bottle rocket sounds like when it hits the water? Today we wonder what the thrill was, but then it was a grand time. The most suspense filled question was, which group of friends will try to scare us tonight?

We typically played games, fished, drank pop, and tried to stay awake until after midnight. Food consisted of chips, pop, and fish in the evening. We normally scrambled eggs and made bacon for breakfast. One year we went gigging frogs and managed to get a few. That year we also had fresh frog legs for breakfast.

This yearly outing came to an end when we joined our youth group. We then had our youth camping to attend. However, the last year that we had planned it did not turn out as planned. We had all plans made out. The morning of our outing, the neighbor’s youngest son came to our house to make some final plans. He was all excited. That evening our laughter turned to mourning.

We were almost all farm boys. As I stated earlier, work comes before play. The neighbor had hay to put up before our friends could go. In a tragic farm accident, our friend passed on to eternity. It was sad group that gathered for the funeral. We had to face reality. We need to live this life so that we are ready to pass on.

There are a few incidents that I will recount from history. In the early 1900’s the older boys at times resorted to wrestling. There was one particular family, the Klines, that was known to be extremely strong. One of those men was said to have pulled a plow by himself. Another died from overdoing it, he was pulling a truck out of the ditch by hand and succeeded.

These boys were known far and wide for their strength. A box-wagon load of roughnecks came about 12 miles to prove that the Klines could be beaten. When they arrived and stated their mission one of the Kline boys ambled over and flipped the whole wagon on it’s side. Needless to say, all fight was gone.

In another incident, a challenger showed up. He wanted to wrestle. Being a peace loving Amish fellow, young Kline agreed. First he said, I need a drink. Lets go down to the basement and get our thirst quenched and then we will wrestle. The innocent contestant followed him. In the basement, Kline said he would like a swig of cider. Instead of getting a glass, he walked over to the big barrel and picked it up. He then proceeded to drink out of the wooden barrel spigot tipped above his mouth. Needless to say, he won the match without physically grappling.

So as you can see. We are taught to work hard. We are also taught to enjoy life and play when the work is done. We had no video games but our play developed our working skills. What better way to condition a man to drive a team of horses than to give a boy a pony. What better way to accept the work came before play, than to reward hardworking boys with the afternoon and evening off to go camping or play softball!

To calculate shipping to your location please fill out our shipping and delivery form. We will provide a custom estimate to ship your product. Shipping & Delivery Form

Javon Miller is an Amish Solar Systems Specialist who has spent many years helping people with their solar needs. Javon and his family live in Holmescounty, Ohio. Javon writes for local publications sharing his experiences of Amish lifestyle.